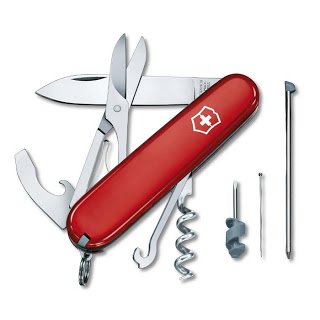 I used to have an awesome Swiss Army knife. It was given to me by my eldest sister as a 21st-birthday present. I had been wanting one for years, and considering the milestone birthday, and the fact that she’d first taken the time to have my initials engraved in the blade, it was an object to which I’d formed a particular sentimental attachment. It was shiny and compact; both beautiful and practical. And for more than a few years, I carried that handy little tool in my pocket at all times.

But as I passed through airport security in Seattle one day, my folded-up knife was stashed in a small inner pocket of my carry-on bag. I had completely forgotten it was there, and apparently, the TSA screeners never noticed it. I boarded my flight without incident, and for the rest of that trip, I was totally oblivious to the illicit little stowaway in my backpack.

That is, until it was time for me to fly home.

The more-alert TSA screeners at Newark’s airport detected the knife right away. The agents immediately pulled me aside to ask me what, exactly, this potentially lethal object was doing in my carry-on. I explained my honest oversight to them, and they seemed to understand. Nevertheless, they weren’t about to let me board a plane with that blade in my bag. I was presented with a choice: Go back and check my carry-on (and almost certainly miss my flight), or toss my knife into a sad receptacle full of forbidden items discarded by other absent-minded travelers. In the heat of the moment, I made a snap-decision, and ruefully (almost tearfully) relinquished my treasured Swiss Army knife.

I’m sharing this sad tale because I recently read that the TSA is about to relax its restrictions for knives on planes. Today, it’s considered unsafe to carry any knife onto an aircraft. But next month, blades of a certain size will be perfectly fine. It feels kind of arbitrary to me. I mean, has something suddenly changed as far as the inherent risk posed by a two-inch blade? Or is the TSA telling us that flying would have been just as safe all along without a decade-long ban on pocket knives?

In other words, was losing my Swiss Army knife a noble sacrifice made for the greater cause of safer skies? Or was it just another degrading act of TSA security theater, serving only to coddle the reptilian brains of anxious travelers? I really don’t know.

As an anxious flyer myself, I readily admit to sometimes allowing myself to be soothed by hollow security gestures. (Whatever gets you through the flight, my friends.) But from the grounded comfort of my home office, I feel more free to rationally ponder the implications of these measures, and question whether they make us safer, or just make us feel safer.

I understand the original rationale behind the knife ban. And I realize that the line between genuine security, and the mere illusion of it, is a blurry one. I don’t pretend to know what it takes to keep a planeful of travelers safe.

But I do know that reactionary, emotion-based impulses frequently lead to less-than-reasonable decisions. (Heck, if all security decisions were based on my usual pre-flight emotions, the only objects allowed on planes would be donuts, Valium, and Captain Sully.) And useful or not, the security measures born in these rash moments seem to have exacted a troubling toll on the weary traveling masses.

So, with these policies subject to sudden and seemingly arbitrary reversal, it does seem reasonable to ask the overall question, “what for?”

Anyway, I’m not trying to get all mired in a controversial debate to which I bring zero expertise. And I really don’t mean to offer commentary from one side or the other. (I’ll leave that to The Onion.) I’m just saying, now that the TSA’s decided it’s safe to carry knives onto planes, I wish I could get my knife back.

Yup, it’s official. Mike and I are engaged! Let me tell you how it all went down.

It began one Sunday afternoon a couple weeks after Mike and I started dating. We were just beginning to introduce each other to our respective friends, and that day, a good friend of mine would be meeting Mike for the first time. Somewhere between brunch and a trip to the mall (I know. Super gay.), Mike stepped away for a moment, and I eagerly seized the opportunity to gather my friend’s first impression:

It was one of those moments where as soon as you hear yourself saying the words, you realize you actually mean them. It’s sort of startling, but in a completely wonderful way. I suddenly realized this was the first time I had ever felt that way about someone, let alone had the conviction to say so out loud. Mike and I barely knew each other, but that’s exactly how I felt. And honestly, I never stood a chance. I was no match for Mike’s instant, irresistible charms, and he basically had me at the first “let’s get dessert.” By now it was obvious to anyone who knew me that I was smitten like never before.

Four years, eight months, and several days later, I worked this little story into the speech I delivered while proposing to Mike. (And yes, it was I who did the proposing, to answer the most-asked question of our engagement thus far.) After all this time, my early-on sentiment was about to become reality. Sure, there was never much doubt that we would eventually get there, but we’d never been in a huge rush toward the altar, either. We didn’t mind just taking our time. And anyway, before we could do anything, this had to happen first.

But finally, after months of anticipation, it was time.

Last Friday night, under the pretense of treating him to a quiet post-birthday dinner, I slyly lured Mike to one of our neighborhood’s finer dining establishments. I made my way to the restaurant a little before Mike (slipping out early for a sudden “work emergency”), and arranged to have flowers and champagne waiting at the table for his arrival. But with everything in place, I was still stressing about when I was supposed to pop the question. (Over the first drink? Over the main course?? Over dessert??? Mmmm … dessert.)

Mike seemed perfectly at ease during our usual pre-dinner chitchat, but I was nervous, sweaty, and conspicuously fidgety. I couldn’t hold out much longer. Once the server had poured the champagne and taken our dinner orders, I decided it was do-or-die time. With a deep breath, I reached across the table, took Mike by the hand, and delivered those heartfelt words about my feelings for him.

Then I asked Mike if he would marry me. He said he’d have to think on it. (J/K, friends! He totally said yes!)

(Mike’s ring from the Dina Martina Gift-Parade collection, and mine from the decidedly better-tasting Top Pot collection.)

The bubbly-fueled aftermath of this moment is a bit blurry. There were some teary, choked-up exchanges of sweet, lovey-dovey nonsense, followed by a dizzying discussion of all the potential details of our wedding, followed by a flurry of ecstatic phone calls to family and friends that basically consumed the rest of our night. One thing I do remember is that Mike called his folks right there at the dinner table, and while they were overjoyed by the news, they expressed very little surprise. (Turns out someone had privately spoken with them beforehand in order to obtain their blessing. Sounds like a classy guy to me.)

The next day, as our news began to spread, the elated congratulatory calls kept pouring in, and some friends even showed up with vital engagement provisions:

And I must say, all the wonderful, enthusiastic responses from our dear friends and loved ones have been nothing short of overwhelming. We couldn’t be happier or more excited about our plans, and we’ve never felt so loved.

Now all we have to do is plan the damn thing. (No sweat there, right? RIGHT?) We’ll be figuring out the exact where and when very soon, but we’re planning on a Seattle wedding sometime this summer (shooting for June 15th – already our anniversary!). It’s gonna be a hectic few months. But hey, at least we know some great wedding-stationary folks!

And if the Muppets can pull it off, so can we:

(Yes, my inclusion of this clip should seen an endorsement of frog/pig marriage. Love is love, people!)