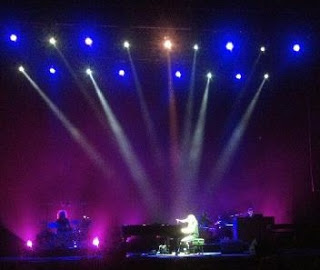 I saw Regina Spektor in concert for the first time back in 2009 at the Paramount Theater in Seattle. Ever since, that performance has ranked high among my all-time favorite shows by a popular musician. I straight-up adore Regina Spektor, and if only I were heterosexual, and not madly in love with this guy, I would totally make it my life’s mission to woo and marry her. She is a delightful performer who seems genuinely delighted to be on stage. And, as you might imagine, girlfriend’s got some serious chops as a pianist, vocalist, and composer of music. There’s really nothing not to love about her.

The one thing missing from that otherwise outstanding show three years ago was Mike. Like so many things of entrancing beauty, I feel Miss Spektor’s music is best enjoyed in the company of one’s true love. (I know. Barf). I take full credit for eventually turning Mike on to her music, but at this early-ish point in our relationship, she had yet to take hold.

Fast-forward to last week, and we find Mr. Curato gleefully humming tunes like “On the Radio” and singing along with “Us” as he purchases our tickets to Regina’s latest show at the Paramount. He’d fallen for her at last, and was now coming with me to see her. Mission accomplished.

I’ll spare you a long, wordy review of the performance itself, except to say that Regina was as delightful as ever. She was in top musical form, and seemed to be truly enjoying herself and all the affection from her doting audience. She played every song I was hoping to hear (well, almost), and there were more that a few “I’m so happy to be here with the person I love” moments. (I know. More barf). And despite Mike’s being stuck behind a big-haired, busy-headed gal, and my being stuck next to an annoyingly fidgety tween, the view from our seats was terrific. We even spotted the lovely Kimya Dawson kickin’ it in the audience (the opening act had been the lead guitarist for the The Moldy Peaches), so that was big bonus thrill for us.

So yes, all in all, it had been a lovely and satisfying evening of music. I haven’t been much of a concert-goer lately, so it’s always a pleasure when the ones I do make it to prove to be truly worthwhile. And I feel particularly lucky to have such a willing and musically compatible partner in Mike. It really makes the experience that much sweeter.

Apparently, today is Left Handers Day. I had no idea.

I was beginning to wonder why so many posts like this were showing up in my Facebook feed today (thanks, Mary!). I guess that explains it. This has supposedly been going on for twenty-three years, so again, as a proud, lifelong lefty, WHY AM I JUST LEARNING ABOUT THIS NOW?

Anyway, in honor of this special day, please enjoy these fun facts I’ve put together about lefties:

Lefties make up only about 13% of the population, but they account for 50% of the last twelve U.S. presidents. (Half of The Beatles, too!)

Lefties are twice as likely to qualify for membership in Mensa. (Should come as no surprise to anyone who spends time with me.)

“Stewardesses,” “reverberated,” and “desegregated” are the longest English words that can be typed using only the left-hand side of a standard keyboard. (You’re now looking down at your keyboard and testing this for yourself. Admit it.)

Each year, many millions of left-handed Americans are killed, maimed, or humiliated   while operating everyday gadgets designed for right-handed use. (Okay, maybe a slight exaggeration there. But seriously, research shows that we lefties are far more accident prone, and will die three years earlier than our righty counterparts. Crap.)

Jack the Ripper was a lefty, which kinda makes sense when you consider that the Latin word for left is “sinister.” (But how, then, do we explain Dexter?)

Bart Simpson (along with many other Springfieldianites) is a lefty, and has been consistently animated as such for the over twenty years. (A tribute to Matt Groening’s own left-handedness.)

I am the lone lefty among my parents’ thirteen children. (Yes, I’m a freak.)

Lefties are empirically awesome. (This is fact. Don’t question it. I’ve done the research.)

Okay, that’s all I’ve got. I do hope that everyone was able to enjoy post, and that you righties out there didn’t feel too left out.

A Happy Left Handers Day to you all! 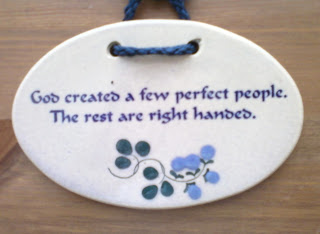 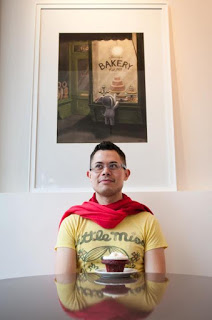 Greetings, Danned visitors! I realize some of you may already know about this, but I just had to take a little blog-space to share some incredibly exciting news (and to shamelessly brag on my amazing and soon-to-be-famous boyfriend).

Earlier this week, Mike, who has long aspired to be an author-illustrator of children’s books, announced to the world that he’s landed his very first book deal! After considering several generous offers, he’s agreed to a three-book hitch with Henry Holt Books for Young Readers. (Apparently, a three-book deal is quite the coup for a first-time author). Here’s the official press release as it appeared in Publishers Weekly:

Laura Godwin at Henry Holt has bought world English rights to three picture books by debut author-artist Mike Curato, featuring his character Elly the Polka-Dotted Elephant; the books are scheduled to come out annually beginning in fall 2014. Curato, a graphic designer living in Seattle, won the Portfolio Award at the SCBWI winter conference earlier this year. Brenda Bowen of Greenburger Associates brokered the deal, which Godwin won at auction.

Yep, that was in PUBLISHERS WEEKLY. You know. No big.

Needless to say, Mike is elated beyond words. I believe “in a surreal trance” best describes his state of mind over the past few days. This is basically the realization of his lifelong dream, so yeah, he’s in a pretty good mood. I know I’m far from alone when I say I could not be more thrilled for him, and I am SO EFFING PROUD OF HIM.

This is a journey Mike’s been on since long before we knew each other, of course, stretching all the way back to wee Mikey’s first pre-school art classes. Indeed, his dream of becoming a great illustrator was one of the very first things I learned about him. Not long after we met, I noticed that every bookstore visit with Mike included a lengthy browse in the children’s section. He told me of his then-stalled efforts to break into the business, showing me the sidelined mock-up he’d pitched to at least one major publisher. And with a look at his exceptional work, it was quickly apparent to me that Mike is a serious, out-of-my-league talent who is destined for great things.

Since then it’s been quite a ride for Mike professionally. In the four years we’ve been together, he’s gone from freelancing as a graphic designer, to heading up the design team of a Seattle tech company, then back to freelancing, to anxiously pouring his heart into the launch of his own specialty wedding-invite business. But amidst the all-around craziness of life, Mike still made time here and there to perfect his art, and to kindle his simmering aspirations.

Late last year, after illustrating an author-friend’s self-published debut title, Mike put together a successful and spirit-boosting exhibition of his recent work, enthusiastically (and appropriately) hosted by Cupcake Royale in Seattle. The show featured a series of charming new portraits of one of his best-loved characters, Elly the Polka-Dotted Elephant. Naturally, the pairing of delectable sweets and enchanting images like this one proved irresistible to local admirers. Seattle was in love.

Things really began to take off for Mike when he attended the Society of Children’s Book Writers and Illustrators (SCBWI) winter conference in New York earlier this year. On little more than a long-shot whim, he entered the conference’s Portfolio Award competition, and was, to his own amazement, awarded first place. His win was immediately followed by an overwhelming barrage of solicitations from agents, editors, publishers, and other folks in the biz eager to snap up this emerging talent and his adorable little elephant. In an exhilarating instant, Mike had been discovered, and was tagged as a rising star in children’s literature. It was now simply matter of choosing the right agent, and locking down the best book deal.

Mike has since teamed up with the fabulous Brenda Bowen, who, in their short time together, has become his tireless advocate, deftly brokering the extraordinary book deal we’re now celebrating.

At this point I would say, “and the rest is history,” if only that remotely resembled the truth. But the reality is that most of the story here has yet to be written. A lot of craziness is about to come Mike’s way (believe me, I’ve seen some of the book-deal deets, and this publisher has big plans for little Elly), but truly wonderful things lie ahead for him as well. This is just the beginning of an exciting new journey for Mike, and I feel privileged just to be along for the ride.

So congratulations to you, my love Mike! I can’t wait to see you achieve your dreams, to share in your upcoming adventures, and to watch the world fall in love with Elly! 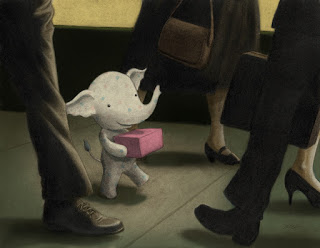 I am now in the waning hours of what was, for me, a five-day weekend. I did a lot of things with my free time. I got my hair cut, got lots of sun, attended a killer drag show, watched a few movies, took more than a few naps, did a bunch of grocery shopping, recovered from some kind of weird summertime flu, spent lots of quality time with Mike, and scored a couple of Regina Spektor tickets (!!!).

What I did not do is write five blog posts, which is how I had rather ambitiously (foolhardily?) planned to spend most of my free time. Not only did I not write anything new, but just now, I actually deleted the three existing draft-posts that I’d been “working on” for some time now (and which had gone stale in the process). So, instead of having produced a handful of witty and engaging vignettes from the Life of Dan, I’m concluding my extra-long weekend eight blog posts (not counting this one) in the hole. It doesn’t feel great.

I do feel like I have a couple of legitimate excuses for my five-day blogging fail. I had been sick for the first part of my weekend. Then the sun came out … A LOT. Plus, I don’t know if you read, but we landed a freakin’ school bus on Mars. (There must be some way I can blame that, right?) Also, quite honestly, I’ve been feeling a lack of blog-spiration lately. I’m afraid my life just hasn’t been all that interesting or blog-post worthy these days. I’m sorry, but you can’t force these things.

Now, I don’t mean to be all Danny Downer here. Sure, I’m disappointed by my counter-productivity, and I know it’s my own fault. But I also know I’ll snap out of this little rut soon. And I’m certain that my current state of slacker-shame will melt away the very moment I click “publish” on my next great blog post.

In the meantime, I’m just gonna let Regina cheer me up. Enjoy!